This window is a Media Manager that lets you find on your disk the media files used in a Gedcom file and link them back to their corresponding genealogy events.

This situation may occur if you have modified your photo folders for instance, or if you have just migrated your genealogy from another software. 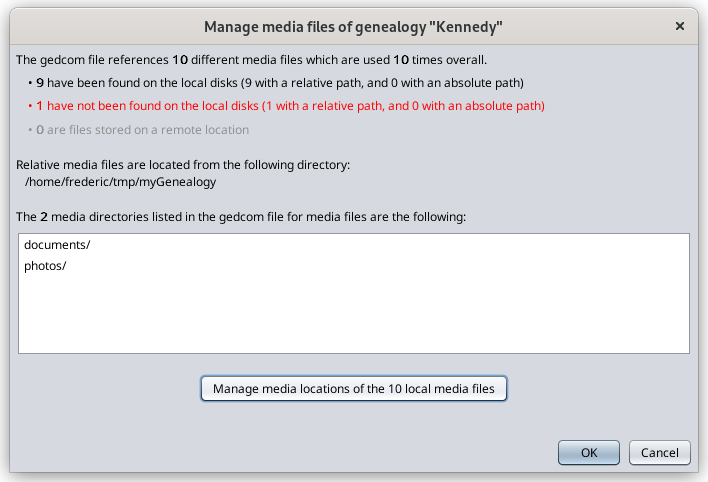 This screen allows you to ensure the correct link between your Gedcom file and your media files.

The first 3 indicators tell you how many Gedcom files are correctly attached or not depending on their nature, out of all the media files indicated in your genealogical data.

In the example above, one of the media file has not been found. It relates the red line above. This is a problem because Ancestris will not be able to display the corresponding media.

If you don't have that red line, you're fine and may move on. Otherwise follow the instructions below.

Where can the problem come from?

Now, if you rename your photos directory or just the media file, it may generate a broken link. For instance, if your photo file becomes /mygenealogy/media/MyPicture.jpg with media instead of photos, Ancestris will not find it because it still thinks it is in the "photos" folder, not "medias".

This is enough to break the link. The Media Manager above will consequently display your photo as an unfound media.

Have you moved your Gedcom file?

Rather than renaming a media folder or a file, you may have just moved your Gedcom file.

Relative position between your Gedcom and your media

Absolute position between your Gedcom and your media

Have your files been deleted?

Another possible reason for a loss of link between your Gedcom file and your media files can also come from file deletions on the disk. It's more annoying because you have to already get hold of those files before continuing with the media manager or else removing the links in the Gedcom file.

The Media manager does not remove the links, it just renames them.

If you are confident that your media files are somewhere on your computer, click the button at the bottom of the window similar to this one.

This window first gives the name of the directory where the Gedcom file is located. Relative paths will start from there.

Underneath, in the table, you will see the list of all the different paths found in the Gedcom file (all the FILE tags).

On each row, you can click on the "..." button in the Search column to locate the corresponding media files.

In the example above, the following window appears if you click on the first button with the unfound media file. 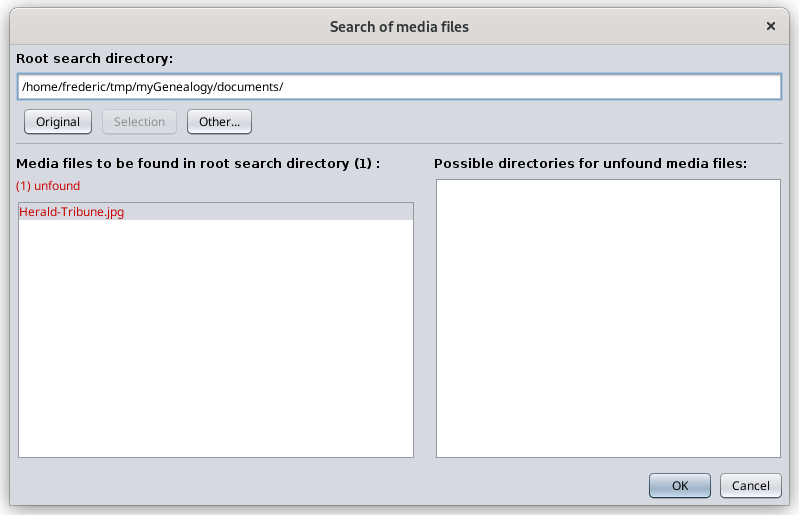 This window will help you find the lost file.

Ancestris will search for the file in all directories within the root directory indicated at the top. You can change it using the "Other..." button, or 'Original" to go back to the original root directory.

The files to be found are listed in red in the left column. Otherwise, they will appear in green. In this example, the file to be found is "Herald_Tribune.jpg"

The directories where the files exist are in the right column.

For instance, below I changed the root directory  to myGenalogy and the photos folder appeared on the right. I pressed the "Selection" button and then, the file on the left becomes green again, and the root folder was updated to "Photos".

The file had apparently been moved from "Documents" to "Photos". If I prefer to move it back to Document, I can do it using my file explorer after cancelling the action here. Otherwise, just click OK.

You will be back to this window below,where the counters have been updated, the unfound file is no longer unfound.

When all the Found boxes are checked, you have found all the lost files.

The Media Manager will show this: 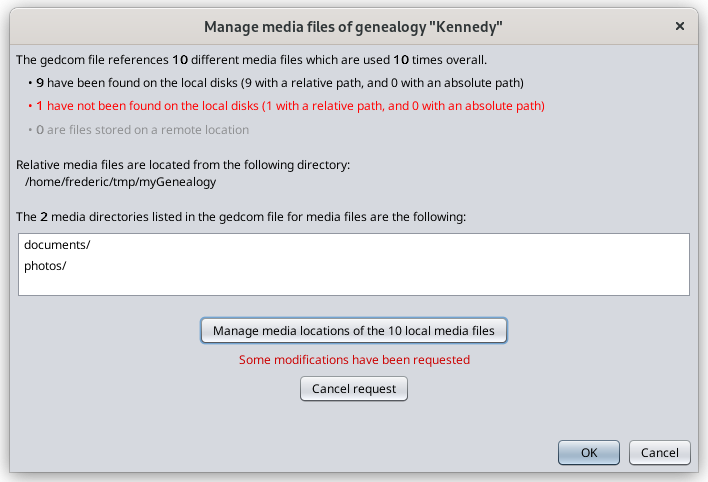 At this stage, no modification has been made to the Gedcom file.

If you are OK to proceed, press OK. Otherwise, press the middle button "Cancel request".

By pressing OK, if some media files pointers in the Gedcom file are to be modified,  you will see a result panel like this one. 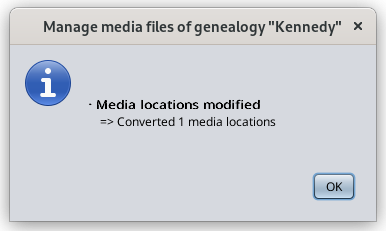 Revisions
Export
Back to top