This function generates or erases genealogical numberings of individuals in a genealogy. 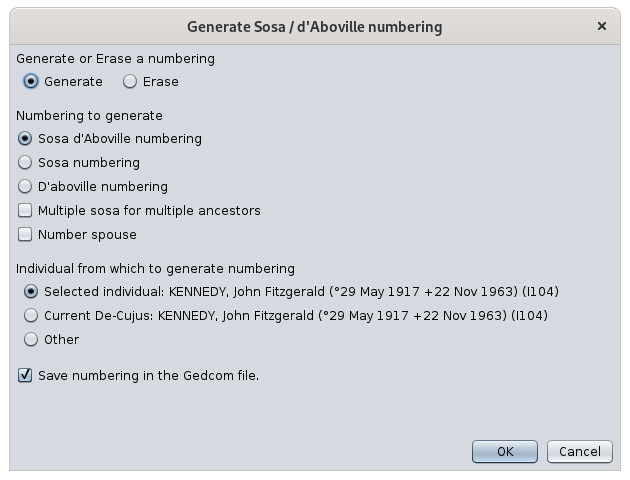 The term De Cujus comes from the Latin expression whose entire formula is "Is de cujus successione agitur" and designates that of the succession of which we are debating.

The term Sosa-Stradonitz refers to two famous genealogists: on the one hand Jérôme de Sosa, a Spanish Franciscan monk, who in 1676 used this system (invented, it seems, by Michel Eyzinger at the end of the 16th century), on the other hand Stephan Kekulé von Stradonitz, who, from the end of the 19th century, took up and popularized the system advocated by Sosa.

The d'Aboville numbering owes its name to the genealogist Jacques d'Aboville (1919-1979) who invented it.

The Sosa-d'Aboville numbering is an Ancestris invention and combines the two previous numberings.

Several numberings can coexist at the same time in the same genealogy. Ancestris allows you to add and remove them as you wish.

It is also possible to maintain dynamic numbering each time an individual is created or deleted. We do not recommend this possibility on large genealogies because it is both unhelpful and resource intensive.

From a reference individual - the De Cujus -, the Sosa numbering goes back in the past. It is generally associated with a numbering of the generations.

The De Cujus is the individual taken as a reference in the Sosa numbering, the one who receives the number 1, and which is also called root.

The choice of the "Sosa" De Cujus is arbitrary. It can be yourself, your spouse, your elder child, your grandson, etc. The younger the person chosen as the De Cujus, the more individuals will carry a Sosa number.

In Ancestris, this choice is not definitive: as we will see, this tool makes it possible to change of De Cujus easily and instantly.

The two members of the same parent couple, respectively bear two consecutive numbers, the even number for the husband (the father), the odd number who immediately succeeds. , for the wife (mother).

Each generation, i.e. each degree of ancestry, can be calculated and numbered from the Sosa number.

For each generation, the smallest number is the same as the theoretical number of this generation.

Computers have made the Sosa system much less critical. Genealogy software are obviously capable of managing, in an automated and secure manner, the various links between individuals of 'a single file, without any recourse to this numbering method.

This is why the Gedcom standard has not provided any particular tag to store the Sosa number.

However, as this numbering system is still very popular among genealogists, and very useful to identify relatives, Ancestris decided to use it. Certain views will display the Sosa number of the individual if it exists for that individual, and if it has been generated in the genealogy for at least one De Cujus individual.

To store the Sosa number, Ancestris uses a special user-defined tag starting with the character "_" (underlined): the _SOSA tag, which indicates the Sosa number, followed by the generation number of the individual.

In order to generate the Sosa numbering, select the to-be De Cujus individual and open the Context Menu with a right click on it.

Another alternative: go to the Edit menu and select Generate Sosa numbers.

button in the main toolbar.

The Generate Sosa / d'Aboville numbering panel opens up and displays the various numbering possibilities.  Make your choices and press OK to start numbering.

When a direct ancestor of number 1 De Cujus is added to the genealogy, the Sosa number is not automatically attached to this new individual. You would have to generate again the numbering.

Likewise, if you decide to modify the choice of the De Cujus, you must erase and regenerate the numbering again from the newly chosen De Cujus.

The Aboville numbering designates a method of numbering all the direct descendants of an individual taken as a reference.

From a reference individual, the d'Aboville numbering is carried out in descending generations, that is to say from the past to the present.

In the d'Aboville numbering, the De Cujus is the individual taken as a reference, in other words, the common ancestor from which this numbering starts. It is assigned number 1.

A d'Aboville number is made up of several numerical elements separated by dots, the first element (or prefix) relating to the De Cujus, the last (the one on the right), to the individual himself.

It is for this reason that the De Cujus number contains only one element: the number 1, the latter possibly being accompanied by a letter (1a, 1b, 1c, etc.)

Apart from the De Cujus, each individual receiving a d'Aboville number is necessarily a direct descendant of this De Cujus. The number of each of these descendants always includes:

When a "d'Aboville" person (a descendant or the De Cujus) is part of several families (in the event of remarriage, for example), the numerical element which represents him is accompanied by a lowercase letter. following the chronological order of these different families: a for the first family, b for the second, c for the third, etc.

Just like the Sosa numbering, computers have made the d'Aboville system much less critical.  This is why the Gedcom standard has not provided any particular tag to store the d'Aboville number.

However Ancestris decided to use it. Certain views will display the D'Aboville number of the individual if it exists for that individual, and if it has been generated in the genealogy for at least one De Cujus individual.

As the name suggests, the alternative numbering Sosa-d'Aboville is a hybrid of the two systems Sosa and d'Aboville.

In a genealogy, it identifies all the individuals having common genes with the De Cujus, while maintaining a distinction between, on the one hand, the direct ancestors (the "Sosa" individuals), and on the other hand, the collaterals (brothers, cousins, small-cousins, etc.)

From a "Sosa" De Cujus, the Sosa-d'Aboville method generates a double numbering.

1. Each direct ancestor of the De Cujus (each "Sosa" individual), receives a regular Sosa number.

2. Each “non-Sosa” individual descending from a “Sosa” ancestor receives a “d'Aboville” number, generated from the closest Sosa ascendant. The prefix (the first numeric element) of this particular number is not 1 - as in the “strict” d'Aboville numbering, but the number of the nearest Sosa person. This is how among the children of Sosa 6, we will find, the Sosa 3 (the mother of the De Cujus), but also the numbers 6-1, 6-2, 6-3, etc. (the brothers and sisters of the De Cujus).

Example: the individual carrying number 4-1.2 is a cousin of the De Cujus on the paternal side, in other words the second child of his uncle and aunt.

In Ancestris, the property tag associated with this numbering is _SOSADABOVILLE.

When you use Ancestris, we recommend you use the hybrid Sosa d'Aboville numbering - _SOSADABOVILLE - as it includes the benefits of both Sosa and d'Aboville numberings. This is also a visual way to identify "blood-related" individuals at first sight.