The Datulator is a tool to calculate or convert dates. 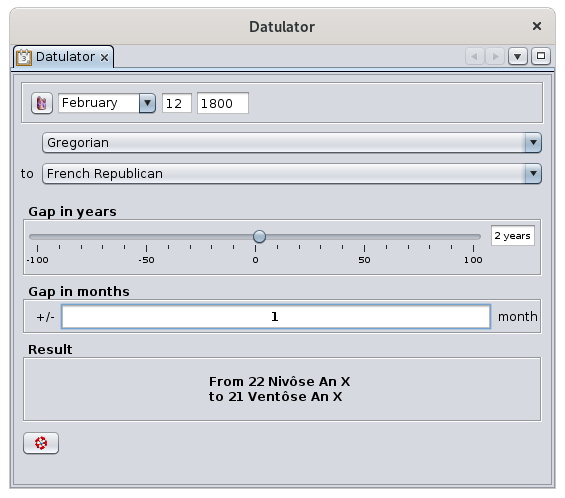 This tool will make your life easier in your research, in your analysis.

The datulator helps you determine the date of an event from the information in a register, a document, etc.

For example, it is often necessary to switch from the Republican calendar or Julian calendar to the Gregorian calendar, or vice versa.

In the Datulator, you also have a precision range feature.

The Gregorian calendar is the calendar used in most of the world. Designed at the end of the 16th century by a college of scientists under the direction of Christophorus Clavius to correct the secular drift of the Julian calendar, it bears the name of its instigator, Pope Gregory XIII. The starting point of the common era, the year 1, corresponds to the Anno Domini (Christian era), beginning approximately with the birth of Jesus Christ.

The Republican calendar, or French revolutionary calendar, was created during the French Revolution, and was used from 1792 to 1806, as well as briefly during the Paris Commune (1871).

The Hebrew calendar is a lunar-solar calendar composed of solar years, lunar months, and seven-day weeks beginning on Sunday and ending on Saturday, the Sabbath day. It takes as its starting point the beginning (Birechit) of Genesis, the first book of the Bible, which corresponds to the year-3761 of the Gregorian calendar.

The Julian calendar results from the reform of the Roman calendar introduced by Julius Caesar in 46 BC. It is used in ancient Rome from -45 BC. It remained in use until its replacement by the Gregorian calendar at the end of the 16th century and, in some countries, until the 20th century. It is still used by the Berbers, in the monasteries of Mount Athos and by several National Orthodox Churches, including the Russian and Serbian Orthodox Churches.

The window allows you to enter the date to be converted in the first field.

The result is displayed in the "result" frame.

The slider allows you to enter a year offset to be added to the result.

A number of months can be entered to introduce an uncertainty. The result will then indicate an interval of dates whose duration will be the uncertainty.

Here are two examples of use.

We find in our records an individual who died on 12 Floréal An IX at the age of 4 years and we are looking for his date of birth.

We enter 12 / Floréal / IX in the date and we specify the republican calendar, either in the calendar button at the left of the day, or in the first drop-down menu.

By positioning the shift cursor on -4 we will have his date of birth. We can use the left and right keys of the keyboard to make changes of 1 year at a time.

Since our individual may have been born at the beginning or end of a month and the records are not always accurate, we will introduce an uncertainty of ±1 month. 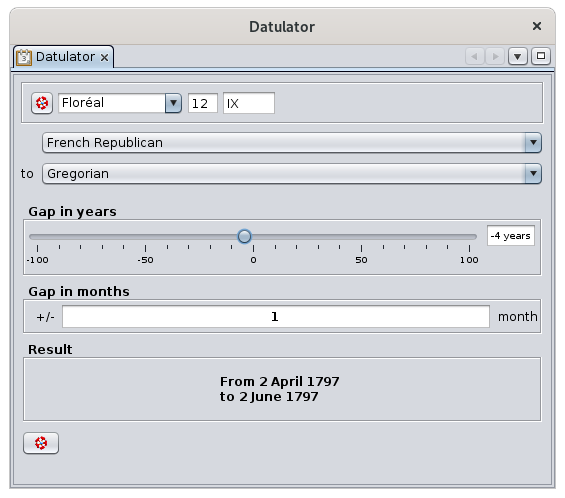 If you ask for the result in republican calendar, just change the output calendar and you should get this:

Since our bride may have been born at the beginning or end of the year and the records are not always accurate, we will introduce an uncertainty of ±6 months.

Our bride would thus have died between November 1, 1792 and November 1, 1793, this date being in the range of the republican calendar we can easily convert it.

We then specify the republican calendar as the output calendar. 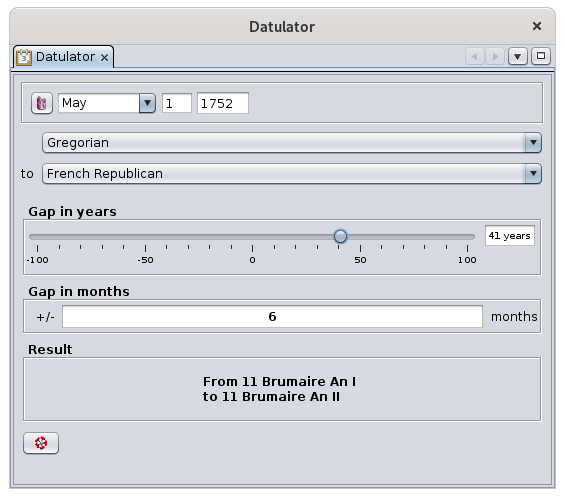 Other combinations are possible - these are just two examples, the uncertainty can be adjusted according to your experience with the hazards of the readings.

Which day corresponds to the 12 Floréal Year I with a manual method?

We use the button at the bottom left that displays the concordance between the Republican calendar and the Gregorian calendar.

Sorry it is only available in French.

The correspondence is therefore May 1st, 1793.

We can do the correspondence in the other direction.

Here is a translation of the months: