The GEDCOM Explorer is a special Ancestris window dedicated to the exploration of each open Gedcom file. 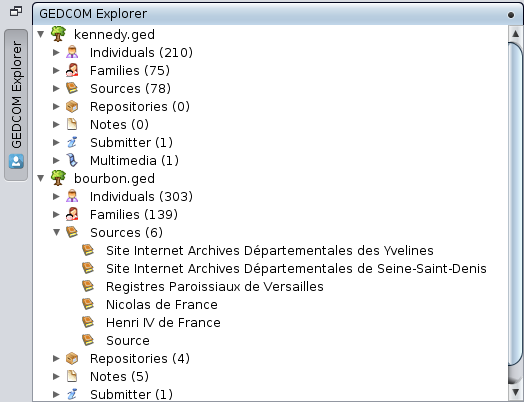 It appears in the upper left corner of Ancestris, in the form of a concealed window with a vertical button.

It is always present and always available, even if it can be temporarily hidden.

The GEDCOM Explorer displays a summary of the different entities included in the Gedcom files currently open in Ancestris. If no genealogy file is open, it only displays a blank page.

Each file opened in Ancestris is presented as a three-level tree structure.

The tree structure is similar to that found in most file managers.

In the example above, we see the GEDCOM Explorer with two open Genealogies, those of Kennedy and the Bourbons. We see for example that there are 210 individuals in the Kennedy genealogy, and 303 in the Bourbon genealogy. We can also see from the flaps that the Bourbon Sources are visible.

The GEDCOM Explorer helps you select and count all the entities included in the genealogy files currently open in Ancestris.

It also provides a number of rather practical possibilities.

A double-click on a line with a flap unfolds or folds the lines underneath.

A double-click on an entity selects the entity and makes it the selected entity.

A right click on a Gedcom line opens a specific Gedcom context menu where you can perform a number of actions:

A right-click on a category of entity does nothing.

A right-click on an entity line opens the Context Menu.From there, you can achieve many actions liek creating other entities, editing them, using tools and reports, etc.

Possible configurations of the window

The concealed position is the default position of the GEDCOM Explorer when Ancestris is opened.

In this form, the tab remains at the top of the left edge of the main window and the panel is usually hidden.

To show the GEDCOM Explorer pane.

When the panel is displayed, GEDCOM Explorer can take the form of an anchored panel by clicking on the anchor pin, located at the top right of the open pane.

From this anchored frame pane, GEDCOM Explorer can take the following forms.

The Gedcom explorer can be put in a floating window, or freed, via the actions of the window menu.

In this case, the Gedcom Explorer is autonomous from the main window from which it has been detached.

From this freed window, the Gedcom Explorer can take the following forms.